Managing The Hybrid Office Of The Future With A Couple Clicks

Maptician is the office real estate tool crafted for this moment.

This article appeared in Above the Law on August 26, 2022 | Written by Joe Patrice 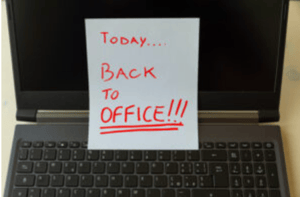 Hybrid work models appear to be the way of the future for the legal industry and while firms will spend the short-term fretting about mentorship and face time, the long-term challenge will be office space. There’s not much reason to be dropping big bucks on floorspace that sits vacant 40 percent of the time. In a lot of ways, with hybrid work as multi-year leases expire, more firms will have to grapple with fundamentally reimagining the legal office.

There are a number of ways to reinvent the office environment. Some firms were even looking ahead before the pandemic, like White & Case embracing communal work spaces and Boies Schiller focusing its new office around conference rooms and war rooms as opposed to traditional offices. And in the post-pandemic hybrid world, we’ve seen firms adopt “hoteling.”

The latter example, California’s Farella Braun + Martel, made its leap into the future with the help of Maptician. Maptician doesn’t love the term “hoteling” but since there’s not really a handy alternative, that’s what we’re going with.

While attending ILTACON 2022, I got an opportunity to see Maptician in action and it’s ready made to guide firms through this paradigm shift.

This is a standard view of the system in action:

Hovering over the green dots will show who is in that room today and individual users can use a similar map to reserve rooms for themselves at various times — a necessary feature if the firm transitions to a model without permanent offices. The map can also show employees who aren’t in but are expected. Users can search people by name or filter it down to department.

The whole system is amazingly customizable with options to identify certain rooms as off-limits to most employees if you have a persnickety partner and COO AshLea Allberry converted two offices into a conference room with all new furniture in the span of about 11 seconds during the demo just to show off the robust design capabilities.

But in addition to tracking where everyone is camping out for the day, the system provides management with critical insight for the future: 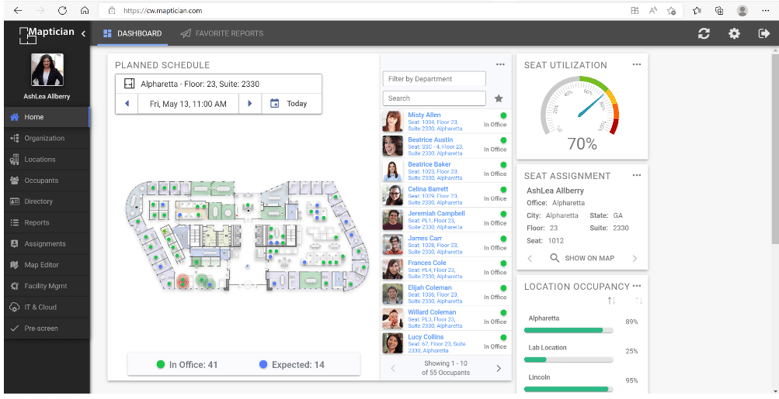 Need fewer offices and more conference rooms? Are too many people coming in on Tuesdays and leaving the office a ghost town on Mondays? The system tracks utilization so the firm can make educated decisions about its office management.

There are screens for the financial data that the beancounters making important calls about the next lease can monitor.

Hybrid work is still in its infancy and building the model that works best for a specific firm will take time. But even if the firm eschews a full hoteling model, it’s hard to imagine how the decision-makers responsible for the firm’s real estate wouldn’t benefit in some way from what Maptician brings.